Can you imagine how your lungs work?? Finally, it is well packed in your chest and without x-ray vision you can’t see it at all. We show you how to build a model of your lungs and how they work. Sounds exciting or? 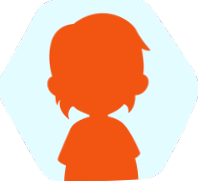 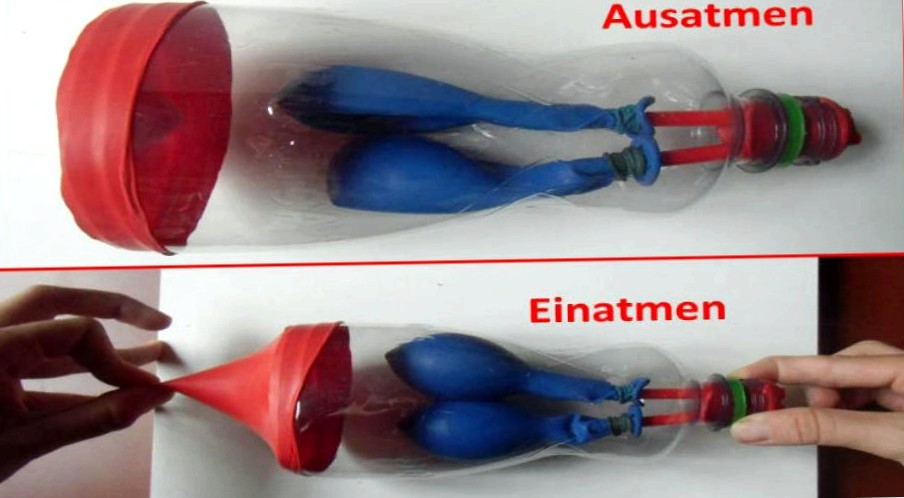 1. Cut off the top half of the plastic bottle with a cutter. Remember to cut away from your body, because a cutter is very sharp and can hurt you. If you are unsure, it is best to ask your parents or older siblings to assist you with your experiment. 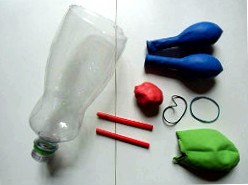 2. For the next step you need the lead tubes. To do this, you need to cut off the back and the front part. Now attach a large balloon with the rubber to the mine tube. The rubber must be tightly wound, because no air should penetrate and the balloon should not slip off the tube after all.
Repeat the same with the second tube. The two tubes with the balloons represent your two lungs. 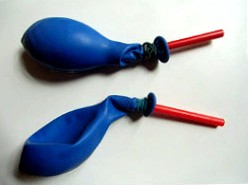 3. Now you put both tubes into the neck of the plastic bottle and close it airtight with the plasticine. It is best to hold your finger against it from the inside and press on the top so that the plasticine really does not let any air through. The tubes have to look a little bit beyond the plasticine, because if the plasticine clogs the tubes, the air doesn’t fit through anymore. 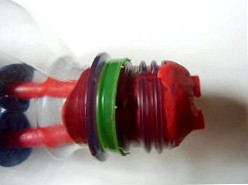 4. Your lung model is almost ready, only the diaphragm is missing. To do this, take the last big balloon and cut off its neck. You put the top part of the balloon over the cut bottle. It may happen that the bottle bends, then you just have to cut off a little of the balloon. You keep repeating this until the bottle doesn’t pop when you release the balloon. 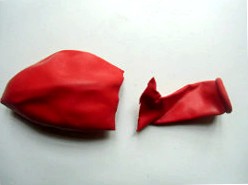 Tip: If you don’t find a big bottle, but only a small one, there will be no room for 2 balloons. But that doesn’t matter, then you just make your lung model with one instead of two balloons. And of course you don’t need two, but only one rubber and one ballpoint refill. But don’t forget that the real lung has two lobes!

The two balloons inside the bottle represent your two lungs.
The tubes to which the balloons are attached are only one tube in your body: the trachea. However, in the lung model you cannot connect both balloons to one tube and as long as you know that there is only one trachea, it is not tragic.
The balloon that closes the bottle at the bottom is the diaphragm. 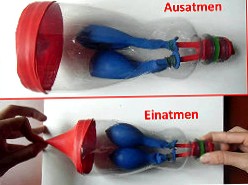 The inhalation and exhalation in the lungs works by air pressure, once there is overpressure and once negative pressure. 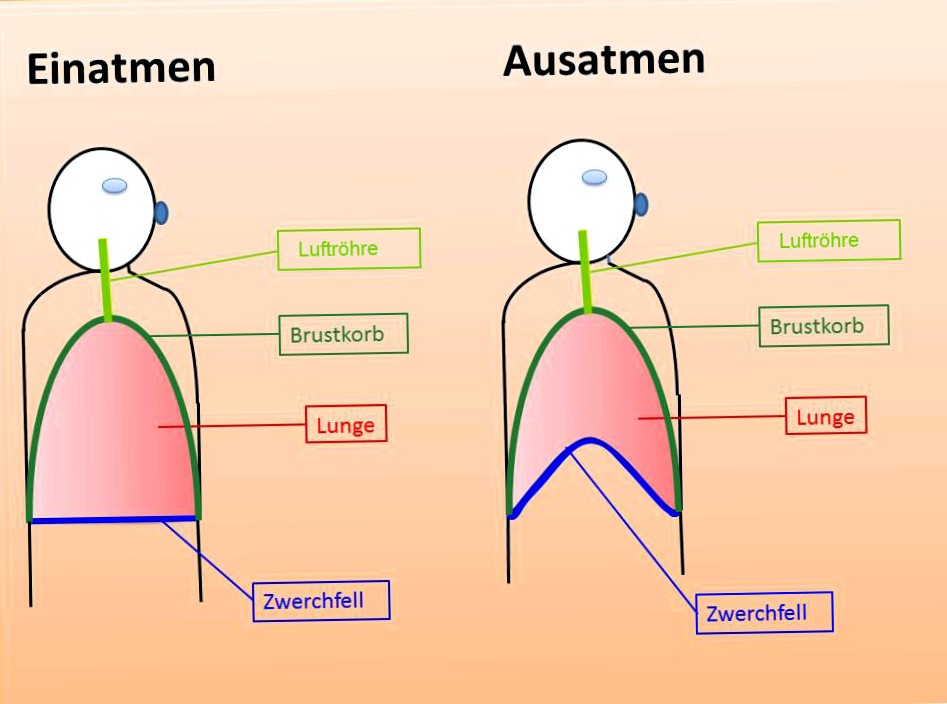 Inhale
When you breathe in, the muscles connected to your diaphragm and chest pull fresh air through your windpipe into your lungs. The diaphragm is then contracted, i.e. downwards. In the illustration you can see very well that the diaphragm is much shorter when breathing in than when breathing out.
In your lung model, it works like this: If you pull gently on the balloon at the bottom, the balloons in the bottle, the lungs, fill with air. The cause, as with your real lungs, is air pressure: if you pull the balloon down, the lung mass is still the same as in the previous state, but the volume, i.e. the space in the bottle, has increased. Now a negative pressure is created. This negative pressure allows fresh air to flow into the bottle from the outside, so that the same air pressure prevails again inside and outside the bottle. Now the balloons (the lungs) fill with fresh air.

Exhale
When you exhale, the chest and diaphragm muscles relax. As you can see in the illustration, the diaphragm becomes longer again. The mass is the same, but the volume (the space in the bottle) has become smaller. This creates an overpressure, which forces the old used air in the lungs outside, so that the air pressure outside and inside is equal again.
So when you release the balloon at the bottom (the diaphragm), it relaxes like the diaphragm in your body, forcing old air out again. The air pressure in the bottle increases, and to prevent the bottle from exploding, air must escape: the air from the balloons in the bottle. On your lung model, you can see that the "lungs" become flaccid.

Have you already built your own lung model? Have you heard the sounds when the bottle exhales, so to speak?