The heritage of the Romans contains the history of the empire and the trace of the ancestors who came to the eternal city from all parts of the then known world.

2,000 years ago, Rome was not only the first city in the ancient world with millions of inhabitants, but also the seat of government of an empire that had about 70 million people from the Persian Gulf to the Strait of Gibraltar, and from the English Channel and the North Sea to the Black Sea.

The history of the world empire and the migratory movements of its population can also be read from the genetic material of more than a hundred people who had lived in the "eternal city" and its surroundings and have now been analyzed. According to this, either they themselves or their ancestors came not only from Rome, but from all parts of the then known world. Jonathan Pritchard from Stanford University, Ron Pinhasi from the University of Vienna and Alfredo Coppa from the Sapienza University in Rome come to this conclusion in the scientific journal "Science". The researchers had analyzed a total of genetic remains from 127 people from the region of Rome, distributed over a period of 12.000 years had lived.

"This study gives us important insights into the history of Rome and the origins of its inhabitants," says Philipp Stockhammer of Munich’s Ludwig Maximilian University (LMU) and the Max Planck Institute for the History of Humankind in Jena, Germany, who researches the archaeology of the eastern Mediterranean region. "The heritage of the Romans reflects the history of the city, which we know well from ancient writings," says the researcher, who was not involved in this investigation.

A history of constant mixing and change

History begins long before Rome existed. Already the hunter-gatherers who lived 12.000 to 9000 years ago in the Abruzzo region east of Rome, were apparently closely related to Stone Age inhabitants roaming other regions of Europe at the time, Pritchard’s team’s analyses revealed. This situation changed about 8000 to 9000 years ago. At that time farmers, whose ancestors probably originally came from Anatolia and thus from today’s Turkey, brought agriculture to Central Italy – the cultivation of wheat, barley, beans and peas, as well as cattle breeding with sheep and cattle. In the genetic material of these Stone Age farmers in the area of today’s Rome Pritchard and his colleagues find only small traces of the hunter-gatherers, who lived there before. The roots of the population in the region of later Rome may have been more likely in Anatolia or even in northern Greece, researchers believe. Apparently the peasants came to the Italian boot via the Balkans.

Around 5,000 years ago, technical achievements such as the invention of wagons on two or four wheels accelerated transport in the countryside. Similar to other regions of Europe, Pritchard’s team therefore finds very strong traces of ancestors who came from the steppes of eastern Europe and central Asia in the genetic material of the Romans living 2900 years ago. The Greeks, as well as the Punic and Phoenician tribes from northern Africa, also established their colonies throughout the Mediterranean and beyond at that time. By this time at the latest, the genetic makeup of the Romans was relatively similar to the people who still live in central Italy today, researchers note.

Genetic analyses that confirm the historiography

About 2,500 years ago, Rome, which had previously been just one of several city-states, began to grow over more than five centuries into an empire around the Mediterranean, eventually extending into northern Africa, western Asia, and southern and western Europe. The remains of Romans from this period, from 2500 to 1700 years ago, testify mainly to ancestors who came from the east of the Mediterranean: from Greece, Syria, Cyprus and Malta.

"This strong migratory movement from the eastern Mediterranean region nicely confirms the written sources from that time," says Philipp Stockhammer. However, a very important part of the population is missing from the study: "If financial circumstances permitted, the classical Roman was cremated after his death," explains the LMU researcher. With such a cremation however the hereditary property burns equal with and Jonathan Pritchard and its colleagues could analyze so probably only the DNA of the poorer Romans or of immigrants.

High lead concentration Even the ancient Romans polluted the environment 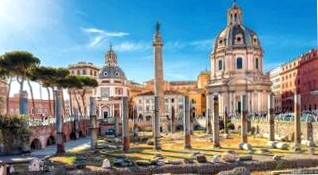 Soon after, the Roman Empire had passed the zenith of its power. After the division of the empire into two halves, Rome, as the center of the western part, lost importance. Instead of a million, probably only a hundred thousand people lived in the city and the influx of people from the eastern Mediterranean largely dried up. Now, according to Pritchard’s analyses, many immigrants from Central Europe came to Rome. Later, this influx from the north continued to intensify as Lombards from Hungary, Anglo-Saxons from England and Vikings from Scandinavia came to Italy.