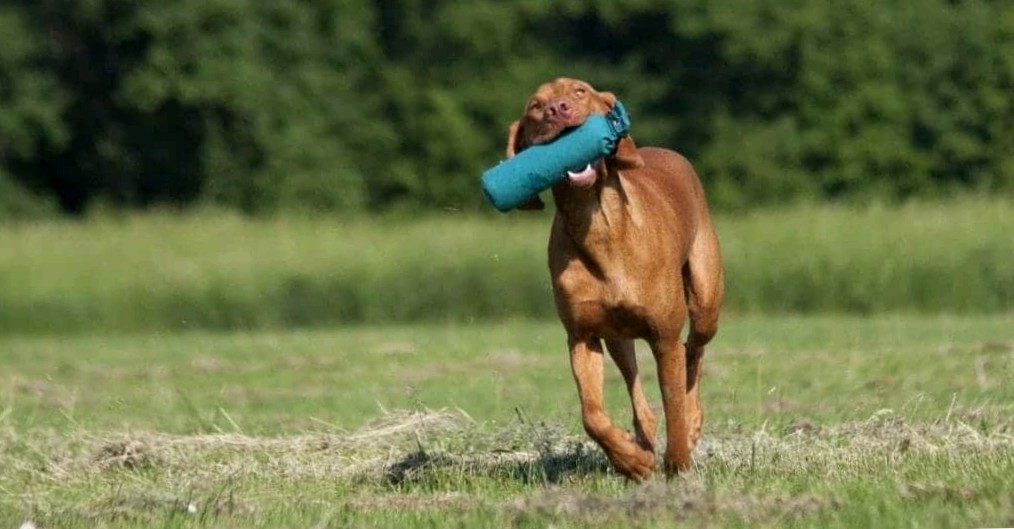 Many owners of a hunting dog breed know this: a nice walk through the woods and meadows and suddenly a hare hops out of the bushes, the dog spots it and rushes after it. Even when led on a leash, he can become so ectasized that another relaxed walk seems almost impossible. Here it would be advisable to keep the dog otherwise occupied, so that he can live out all facets of his hunting passion (locating, fixing, stalking, rushing, grabbing, killing) without endangering other living creatures.

How z.B. how dummy work can help, if agility, mantrailing or other dog sports can be integrated into anti-hunting training and what the word "enrichment" means in living together with dogs, you can read in the article "Everyday activities for hunting dogs". In addition, Greyhound Lucy will show you in video clips how lost search and target training can be used to open up more employment opportunities.

In conversation with dog owners and on the question of occupation possibilities for their quadruped appear again and again terms such as Agility, Mantrailing, Dogdance or other trend sports. These dog sports all have their justification, but a hunting-motivated dog will not stop this kind of activity from hunting by far.

Many dogs – one breed more than the other – have the need to act out their hunting behavior patterns (locating, fixing, stalking, rushing, packing, killing). So how do I manage to satisfy my dog’s needs without harming game or even joggers or cyclists?

This term appears mainly in relation to animals in captivity. It means nothing else than a need-satisfying occupation of body and mind, because boredom is often not only "boring", but can actually make sick. Our house dogs do not live in captivity, but they still need to be exercised according to their type. Last but not least also to prevent behavior problems. This makes it reasonable and necessary to find a substitute for hunt-motivated dogs, which comes close to a real hunt.

Dummy work is particularly suitable as a substitute here. Not only for retrievers, but also for eye-oriented dogs, like z.B. Herding or greyhounds, this is an occupation where they can act out real little passions, namely the behavior patterns already mentioned above, such as watching fast-moving objects, running after them and grabbing them. Although dummy training is an occupation that can be practiced as a real competitive sport. But you don’t have to strictly follow the rules of dummy training. If you like, you can be creative yourself and think of different retrieving exercises. I personally like to combine dummy work with ground targets. This means that before the dog is sent to the dummies, it should touch the targets with its paw. This increases impulse control, frustration tolerance and concentration. After the dummies are laid out, you can also walk a few feet away from the dog and then call him off and send him to the dummies as a reward. In this case, the recall with distraction would be practiced at the same time. You can see how dummy training with ground targets works here:

For dogs, which are rather nose-oriented, the lost search on the backtrack is particularly suitable. To do this, you lay out a dummy or something similar on the path and send your dog back a few meters later with the search task. For professionals this can be over a hundred meters! The great thing about this is that you send the dog actively hunting, just like with dummy work! You practically just stop always forbidding the dog to do everything. The quadruped may and should perform its hunting behavior. This not only keeps him mentally and physically busy, but also promotes cooperation with his human.

Also for dogs, which cannot retrieve yet, there are simple occupation possibilities, which do not need a Vorubung. One can z.B. Scatter food in the undergrowth or under leaves and let the dog sniff extensively. Or you put small chunks of food in the bark of a tree and let the dog search. The wild ancestors of our domestic dogs also spent most of the day searching for food. So playful foraging is quite welcome to dogs. By the way, many owners of "fussy" dogs often find that food they have worked for is often eaten with much greater enthusiasm than "free" food.

Another need, especially in strongly eye-oriented dogs, is to observe game. If you have already trained indicating instead of chasing game, it is useful to put this indicating under signal control in order to be able to use it as a need-satisfying reward. When z.B. When Lucy points out her beloved crows, she gets a click and is allowed to continue watching as a reward. Sometimes she comes running after the click and wants to rush her dummy, which she is allowed to do of course.

In spite of the various suggested activities, this does not mean that you should keep your dog busy during the walk. A small training session of two to three minutes every now and then is sufficient. Regular, short relaxation phases, in which one can z.B. to sit on a park bench and watch the environment together with your dog in peace and quiet, are highly recommended. And: In addition to the balanced employment program, a dog must be able to enjoy his free run in between and have the opportunity to dive into his own world, explore the environment and simply be allowed to be a dog for a change.

Maria Ebeling is a veterinary assistant and dog behavior consultant/therapist with ATN degree. She runs the dog school DOGether in Taunus and especially likes to work with people and their hunting motivated dogs. In addition, the non-violent training of hunting dogs is close to her heart.