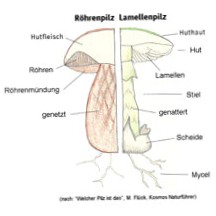 Mushrooms are commonly considered plants. Eventually they are found at the vegetable stand between cabbage and lettuce, and they grow like plants in the soil. But the classification to the realm of plants is not quite correct, because they have no real roots, no leaves and even more important: Mushrooms have no leaf green (chlorophyll).

So they are not plants, not animals, not bacteria, but they form the independent kingdom of fungi.

Classification of the mushrooms

Mushrooms have always been a mystery to humans. In 1795, the botanist Jean-Jacques Paulet coined the term "mycology", the mycology. Mycologists distinguish between microscopic fungi (micromycetes), such as the molds, and higher fungi called macromycetes, which include all edible mushrooms. The macromycetes, in turn, are divided into:

Ascomycetes, whose spores are in "Asci" grow up named hoses. For example, well-known representatives are the morel and the truffle .

. and basidiomycetes, which include the cap or stand fungi. Their spores grow on bottle-shaped cells "basidia" called.

How do fungi feed?

Since fungi do not form chlorophyll, they cannot build up organic matter from carbon dioxide and light energy like plants do. They must obtain their food from living or dead plant or animal organisms. You can do it in three ways:

The development of mushrooms

Higher fungi live the longest time of the year exclusively as a widely branched meshwork "mycelium" called, invisibly in the soil.

Only during a short period of time appear their fruiting bodies, which the layman calls the "actual" Mushrooms are viewed. To illustrate, one can compare a mushroom with an apple tree: The mycelium corresponds to the tree, the fruiting bodies to the apples.

At the beginning the fruiting body is only a small round ball. But in this sphere everything is already in the right place: the lamellae (in the case of the lamellar mushroom), the cap and the foot.

How do mushrooms multiply?

Fungi can reproduce asexually and sexually. Only from the latter can fruiting bodies emerge. The process can be described in a simplified way like this: Millions of spores are released from the underside of the cap. This can be up to 40 million per hour for the meadow mushroom. The wind carries them over long distances until they fall to the ground. If this is favorable, the spores can germinate, provided the humidity and temperature are right. Now a fungal thread (hyphe) is formed from a row of mononuclear cells. Through branching, these form a hyphal plexus, the primary mycelium. However, this cannot yet form a fruiting body. To do this, you must first fuse with another different-sexed primary mycelium of the same species. This gives rise to the secondary mycelium, whose cells now each contain two nuclei. If the environmental conditions are favorable, fruiting bodies can develop from them.

Development cycle of a stander fungus

These are just a few introductory aspects of the biology of fungi. The life processes around fungi are much more complex. More detailed information can be found in the following literature.