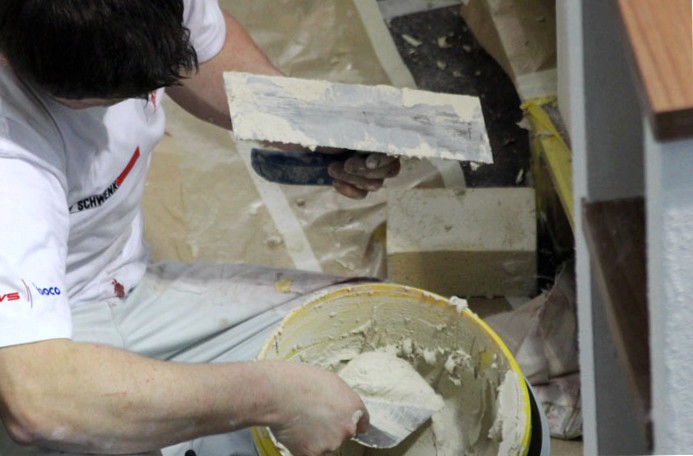 An international research team has developed an artificial substitute for natural gypsum for use in construction projects. It consists of waste products of industrial processes. This gypsum substitute can help improve the supply of gypsum binders to construction sites in countries without their own gypsum reserves. But the gypsum substitute also comes into question elsewhere due to various advantages, as it can be produced relatively inexpensively and with reduced energy input.

On the one hand, the gypsum substitute is produced with sulfuric acid. It is produced as a waste product during the production of heat-resistant fibers. In addition, there are limestone and carbonate components, which are also produced as residual materials in industrial processes. The new material produced in this way contained at least 95 percent gypsum (calcium sulfate dihydrate), making it ideal for use as a gypsum substitute. Variations in the manufacturing process can produce high-strength gypsum as well as building plaster or anhydrite. The latter material is used as an aggregate in the production of cement and as a material for the production of ceramics. The synthetic building gypsum was produced in the usual way using a kiln as part of the research project. Synthetic anhydrite is also produced in the traditional way by firing and subsequent cooling. And the high-strength gypsum substitute was produced with the help of an autoclave, a gas-tight sealable pressure vessel.

In the case of gypsum substitute, the gypsum does not need to be crushed

Gypsum binders are popular in construction projects due to various advantages. They have a comparatively low weight and relatively good thermal and sound-insulating properties. In addition, they are fire-resistant and hypoallergenic: in other words, they contain virtually no allergenic substances. And they do not cause silicosis, a chronic and irreversible lung disease not unknown among construction workers and craftsmen. Gypsum as a building material can also be produced relatively inexpensively. The cost of thermal energy for gypsum production is also limited.

Particularly in terms of costs, gypsum substitute again has advantages over natural gypsum. The synthetic gypsum substitute is immediately available – as desired – in the form of a powder. In contrast, natural gypsum must first be crushed in order to use it in construction projects. This consumes a not inconsiderable amount of electricity, which is saved in the production of the gypsum substitute. This not only simplifies the production process. In addition, production costs, which fall anyway due to the use of waste products, are reduced. This makes the cost factor a not insignificant argument for the use of plaster substitutes.

Universities from three countries are involved in the project

The international research team that developed the gypsum substitute comes from the Moscow-based Russian National University of Science and Technology MISiS, the Irish University of Limerick and the Belarusian Institute of General and Inorganic Chemistry of the National Academy of Sciences of Belarus. The research results were presented in the Journal of Industrial and Engineering Chemistry.