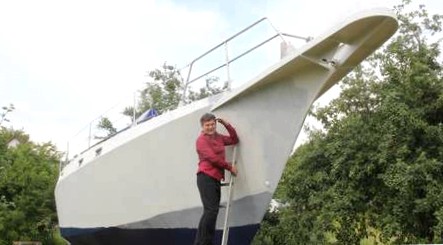 Harbour instead of home: Hans Hillreiner from Hirtlbach in the Dachau district has built a boat for himself and his wife in the last eight years. It is 30 tons heavy and stands in her garden. Still.

Hirtlbach – Wanderlust. Once you’ve really felt it, you know it won’t go away. Barbara Hillreiner knows this feeling. But there was not much time for wanderlust for her and her husband Hans in the past 30 years. Two companies of her own, two children. No one can simply pack their bags and set off on a long adventure. Ten days. Once a year. That was it. More was not in it for the entrepreneur couple. Now everything is different. On 18. June, the two from the little village of Hirtlbach in the Dachau district set off on a great adventure. You sail away. With their own boat, completely self-built. that they will ever come back is unlikely.

Metalworking specialist Hans Hillreiner, 55, stands in his garden at home, walks past strawberries, carnations and a wild meadow. Then you see it: the boat. 4.08 meters high, 17 meters long and weighing 30 tons. An aluminum sailing yacht he has built over the past eight years. Alone.

You build a boat if you like sailing, go to boat shows and realize: I can never afford what I want. Says at least Barbara Hillreiner, 53, and laughs. Meanwhile the adventure didn’t start in the water, but: in the air. Lying on the couch at home – that has never fulfilled the couple. The head always needs something new, just don’t get into a rut, "life is too good for that," says Hans Hillreiner.

On the boat they realize: "Now you are spiritually free"

So they tried something new: Flying Cessna. But Barbara Hillreiner did not feel comfortable, that was not her sport. A birthday present for her husband changed everything. A VHS course for a motorboat license, inland waters. But they soon realized: You’re not allowed to drive anywhere. They gradually increased to the sport coaster’s license. "The moment I cast off for the first time, I realized: now you’re mentally free – for the first time since becoming self-employed," says Hans Hillreiner. That’s when they first thought, "That would be something for the future." 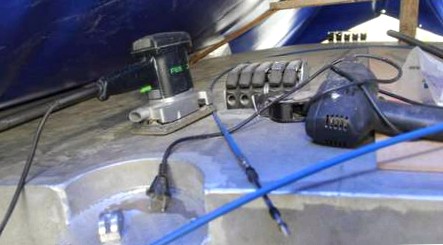 So eight years ago he decided to build the boat on the side, even if at the beginning it was not planned to go away with it and maybe not come back again. "But for all the effort, it would simply be too bad to just take it on vacation for a few weeks a year," says Barbara Hillreiner. "So in the last two years the idea came up to just give up everything."

But how do you build a boat? Designers used to make plans of their boats; their children now sell them for a license fee. Some of the plans are wild, no one can find their way around, says Hillreiner. But if you persevere and tinker around, you’ll eventually have your own 17-meter yacht in your backyard. Hillreiner has always been that kind of guy. As a teenager, he used to repair the engines of his scooters. "The things were always broken, so I took them apart and reassembled them so that they worked again."No one taught him how to do it.

He had every part of his aluminum boat in his own hands, knows exactly where which cable runs, where which connection is. He has studied every part and knows how the electrical system works, how the control system works, and how the engine works. He knows which part goes with which part and where to reach when something is broken. He also did the welding work, some of which involved eight-meter plates, completely on his own. "I don’t want anyone there. If I pinch someone’s fingers off, at least they’re my own."He didn’t get any help until six years later, when it came to interior finishing and painting. Then his wife joined in.

It’s one thing to build a boat, it’s another to decide to sail it away and probably never come back. But: Material things have no value for the Hillreiners – apart from what you really need for life. "All the commercialism, the German routine, that’s just not our world."They are sure that once they have lived the life that is really possible, they cannot go back. 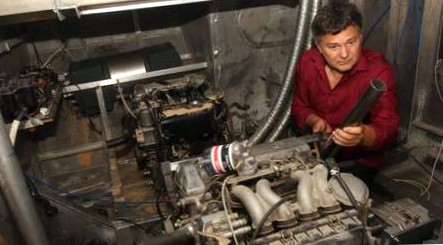 The boat in the garden already has a special effect on the two of them. "I already feel more at home there than in the house." Looking back, the Hillreiners have been detached from this for years. No decoration, no new photos, the house became more and more empty with the time. Home? Not an issue for the two. It is not Hirtlbach that touches both their hearts. It’s freedom, it’s the world.

Two years ago, they were on vacation in the Azores. The place to go for all circumnavigators. There you meet people who have been on the road for over ten years, people you can see: It is right to follow your heart. And they are now. "Because if you say you’ll do it later, then: never do it," says Hans Hillreiner.

They are not afraid of running out of money. You have saved. "We don’t really need anything, and it’s enough for what we absolutely need."And anyone who meets his childhood sweetheart on the school bus and has shared everything for more than 30 years is not afraid to spend the whole day together in the future. The two are more than just spouses, they are friends.

You can meet other globetrotters in laundromats all over the world

And with her husband, out at sea, Barbara Hillreiner can be free too. "No longer have any responsibility. Just facing me and maybe a little bit facing him, that’s freedom for me," she says, looking at her husband for a long time. Her two daughters, 23 and 24 years old, have raised her to be independent and self-confident women. One takes over one company, the second the other. The two never questioned their parents’ plans – "if you want to do it, do it," was the response. "Now we can just be independent, just see something different than the classic Upper Bavaria," she says. For this, the boat is also the very best means of travel there is. You have everything with you and can go anywhere you want – and stay where you like it. Travel to foreign countries, really get to know the people there. On the boat they have everything they need, fridge, freezer, stove, everything is solar powered. In the future, washing will be done in laundromats all over the world. "This is the best place for globetrotters to make contacts and find out everything important right away," says Barbara Hillreiner. 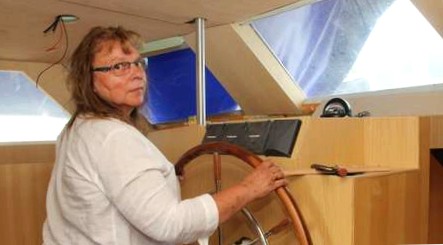 The 17-meter dream is still standing in the garden, behind the strawberry patch, but on the 18. June goes by heavy transport to Nuremberg. There will be the boat on the 20. June launched into the water for the first time. There is no plan for the trip, or better, for the new life. "I’ve had enough stress for a long time," says the entrepreneur. "Such a plan would only be stress again."

From Nuremberg, the journey continues in the direction of France and, near Marseille, into the Mediterranean Sea. Next year in spring the sails come there on the boat, then, one, two years Mediterranean, then Caribbean, South Seas. How many years? No idea. "Life isn’t too short to be happy, you just can’t waste it doing nothing."

"Sometimes, though, you get a bit scared of your own courage," says Barbara Hillreiner. Then she laughs. She knows: In her cabin she can see the stars from her bed. Before they can start, they still have to put the windows in the boat and paint them. Sounds like a lot of work, but Barbara Hillreiner just laughs again. "If you think like that, you don’t need to go away at all. You can never get everything really ready."You have to start living a dream. That’s what it’s for. And for this the boat has the perfect name: Dream.