Many people go into the forest to cut down trees. In most cases, to get firewood for their own fireplace. Es gibt auch Baume auf privaten Grundstucken, die mit der Zeit zu hoch geworden sind und deshalb gefallt werden mussen. Learn what you need to know and how to proceed. 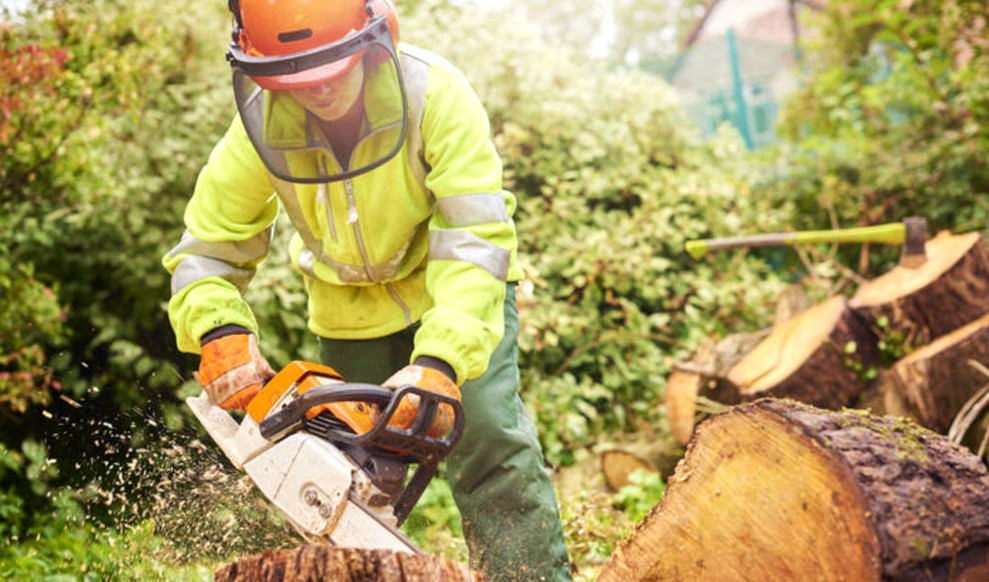 In the forest, only trees that have been marked by the forester may be felled.

In advance: on private and populated properties, the potential danger should not be underestimated under any circumstances and the work should be left to a professional landscaper. To cut down a tree professionally, you need the right knowledge, a chainsaw license and suitable protective clothing. If the tree is in a residential area, you should be aware that damage amounting to several thousand euros can quickly occur if it tips in the wrong direction – not to mention that such work is life-threatening.

Felling a tree: Only with protective clothing!

If you want to make firewood, you need a chainsaw license as a private person. Furthermore, a complete protective equipment consisting of protective pants, safety shoes, helmet with visor, gloves and hearing protection must be available.

You can get a chainsaw license at forestry training centers and adult education centers. As a rule, the course lasts two days and costs about 180 euros. In the forest, only trees that have been marked by the forester may be felled. In most cases, these are trees that are crowding better quality specimens too much.

A job for the professional?

Only those who are trained and who use a chainsaw almost every day can assess the risk that is permanently present due to wind, position or the direction in which the tree is felled. Working in storm damaged timber stands is particularly critical: The tree trunks, which are wedged over and into each other, are often under tension, which only an experienced expert can assess.

In the case of a smaller copse or a fruit tree, the layman may well become a ‘small woodsman’: Be it to remove a larger branch, or the whole tree at once. But here, too, caution is advised: The work should not be tackled without appropriate protective clothing. The chainsaw or other machines for tree felling should of course be mastered and properly operated. In most federal states, private individuals are already required to have a chainsaw operator’s license. Those who have the opportunity to participate in such a theoretical and practical instruction should definitely use this opportunity.

Many private individuals cut down trees in order to produce firewood for their own fireplaces – however, this requires a chainsaw license.

Felling a tree: Step by step

As a general rule, only trees that have been marked by the forester may be felled in the forest. These are trees that crowd the better specimens too much and therefore have to give way. However, the first step in any felling operation is the so-called tree approach. Topics of this preliminary discussion are the growth and the weight distribution as well as the stability and vitality of the tree. After the tree has been approached, the falling direction of the tree is determined. With a chainsaw, you can precisely aim at it and then make the cut exactly at a 90-degree angle to it for the so-called drop notch.

Simply sawing into the tree trunk? Unfortunately it is not that simple. Cutting the notch is a matter of practice and requires a good sense of proportion. Both cuts (sole cut and roof cut) must coincide as accurately as possible – only then will the tree fall in the desired direction. First comes the sole cut. It should be as horizontal as possible and, depending on the strength of the tree, should not cut more than a third of the trunk. Afterwards the felling direction is again exactly aimed. The roof cut, on the other hand, should be set at an angle of 45 to 55 degrees to the sole cut and end up hitting it as accurately as possible. Subsequently, on both sides of the later break strip with vertical and, if necessary, horizontal cuts the tree bark and diagonally branching off root wood are removed.

Now mark the 25 to 35 millimeter wide break line with a pencil on both sides a bit above the fall notch on both sides to make the felling cut precise and straight. The felling cut is made horizontally on the other side of the trunk and is carried out in several steps – until the outer edge of the breaking strip is reached on both sides. After the initial sawing, the first step is to drive a felling wedge into the cut with a hammer or a well-sharpened axe to keep it open. This measure prevents the tree from jamming the chain of the chainsaw with its weight and at the same time you also push the trunk in the desired felling direction. Next, you continue cutting with the chainsaw on the other side of the wedge.

When the tree finally starts to lean, you warn the other people with a loud "tree falls"!" the other people and immediately retreat with the saw to the previously established backslope. Important: This area must be free of branches and other trip hazards. If the tree is lying on the ground, wait a moment and observe the neighboring trees first – often individual branches still break off here and fall to the ground later on. The final step is to limb and segment the log into individual pieces, so the freshly cut wood can be prepared for removal.

Felling trees: This work should not be underestimated

Anyone who usually sits in an office during the day will tire very quickly if they operate a chainsaw for a longer period of time while felling a tree. Here it is always important to assess your own strength correctly and take breaks early or even stop work at the right time.

The potential for danger increases when it is no longer possible to work only from the ground: Those who use ladders or scaffolding should make sure they have good footing and non-slip work surfaces. Working directly in trees is completely inadvisable. Moss often forms on the branches, which quickly leads to slips and then possibly to falls. In such a situation, the layman should also avoid chainsaws or other powered machines because of the high risk of injury and fall back on the good old tree saw. It is also slippery when it rains, snows, ices, or when working on a steep slope.