Intended audience: HTML developers (who use editors or scripts), script developers (PHP, JSP u.a.), CSS developers, web project managers, and anyone looking for guidance on how to choose and apply character encoding

Which character encoding should you choose for your content and how do you apply it to your content?

Content is composed of a sequence of characters. Characters include the letters of the alphabet, punctuation marks, etc. However, in a computer, content is stored as a sequence of bytes, which are numerical values. Some characters are represented by more than one byte. As with ciphers in espionage, the way sequences of bytes are converted to characters depends on the key with which the text was encoded. The Key is called in this context Character encoding.

If you want to better understand what characters and character encodings are, read the article Character Encoding for Beginners .

If you cannot use Unicode encoding, check that the encoding you have chosen is supported by different browsers and that this encoding is not on the list of encodings to avoid, which according to current specifications should not be used.

Check if your choice is overridden by server-side HTTP settings.

In addition to declaring the encoding of the document inside the document and/or on the server, you need to save the text in that encoding to apply it to your content.

Developers must also ensure that the different parts of the system can communicate with each other.

Content authors should specify the character encoding of their pages using one of the methods described in Specifying Character Encoding in HTML.

However, it is important to understand that it is not enough to specify the character encoding inside the document or on the server. This does not change the bytes; you must save the text in this character encoding. (The specification only helps the browser to interpret the byte sequence in which the text is stored.)

It is best to set a character encoding such as UTF-8 in your editor as the default for new documents, if possible. The following image shows how to do this in Dreamweaver preferences. 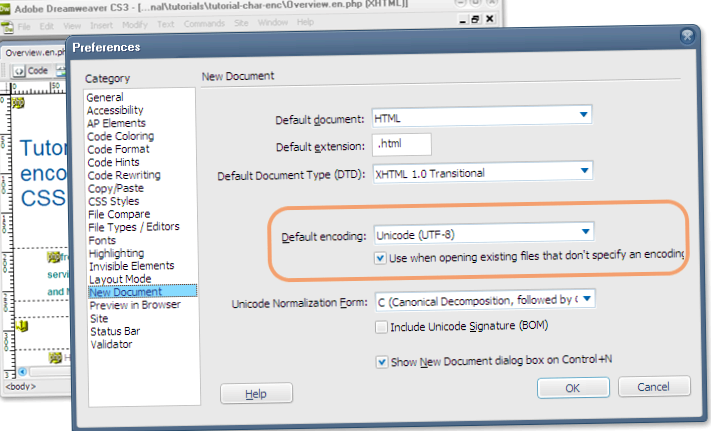 You should also make sure that your server delivers documents with the correct HTTP specifications, because these override the specifications inside the document (see below).

Developers also need to make sure that the different parts of the system can communicate with each other. Web pages need to work with scripts in the backend, databases, etc. can communicate. Of course, this works best if everything is UTF-8 encoded. What developers need to consider can be found in the article Migration to Unicode .

A Unicode encoding such as UTF-8 can support many languages and make pages and forms conform to any mix of languages. If you use a Unicode encoding, you do not need server-side logic to determine the character encoding separately for each page delivered or for all incoming form data. This significantly reduces the processing time for a multilingual website or application.

Unicode encoding also allows to use many more languages mixed on one web page than it would be possible with any other character encoding.

The barriers to using Unicode are very low these days. In January 2012, Google announced that over 60% of the web now uses UTF-8 out of several billion web pages examined. If you add the number of ASCII-only web pages (ASCII is a subset of UTF-8), the figure increases to close to 80%.

All ASCII characters are encoded by exactly the same bytes in UTF-8 as in ASCII encoding, which is often helpful for interoperability and backward compatibility.

Consideration of the HTTP header

You may not have access to the information in the HTTP header and need to ask your server administrators for help. On the other hand, you can change server settings if you have limited access to configuration files or if you are generating pages with scripting languages. See HTTP charset parameter setting for more information on how to change the character encoding specification for a number of files on the server or for content generated by scripting language.

This section contains subtleties that you don’t necessarily need to know, but are mentioned here for the sake of completeness.

If you really can’t avoid using an encoding other than UTF-8, you must choose one from a limited set of character encoding identifiers to ensure maximum interoperability and future readability of your content, and to minimize security vulnerabilities.

The new Encoding specification includes a list tested against current browser implementations. You can find them in the table in the Encodings section. It is best to use the identifiers in the left column of this table.

Notice: If an identifier appears in one of these sources, it does not automatically mean that it would be good to use that coding. Read the following section to learn which character encodings you should avoid.

The HTML5 specification lists some character encodings that you should avoid.

Documents may also not CESU-8, UTF-7, BOCU-1 or SCSU-Use encodings; these were never intended for web content and the HTML5 specification prohibits browsers from using them.

The characters listed in the Encoding Specification replacement-Encoding is actually not encoding, but a fallback that maps each octet (byte) to the Unicode character code U+FFFD REPLACEMENT CHARACTER. Obviously, it does not make sense to transmit data in this coding.

The x-user-defined-Encoding is a one-byte encoding, the lower half of which is ASCII and the upper half of which maps into the Unicode Private Use Area ( PUA). Like the private use space in general, this coding should be avoided on the public Internet because it is detrimental to interoperability and long-term use.