Although women could influence the affairs of state, Rome was by and large a man’s world. Rome’s first law code, the Twelve Table Law, subordinated women to the male head of household, the paterfamilias. 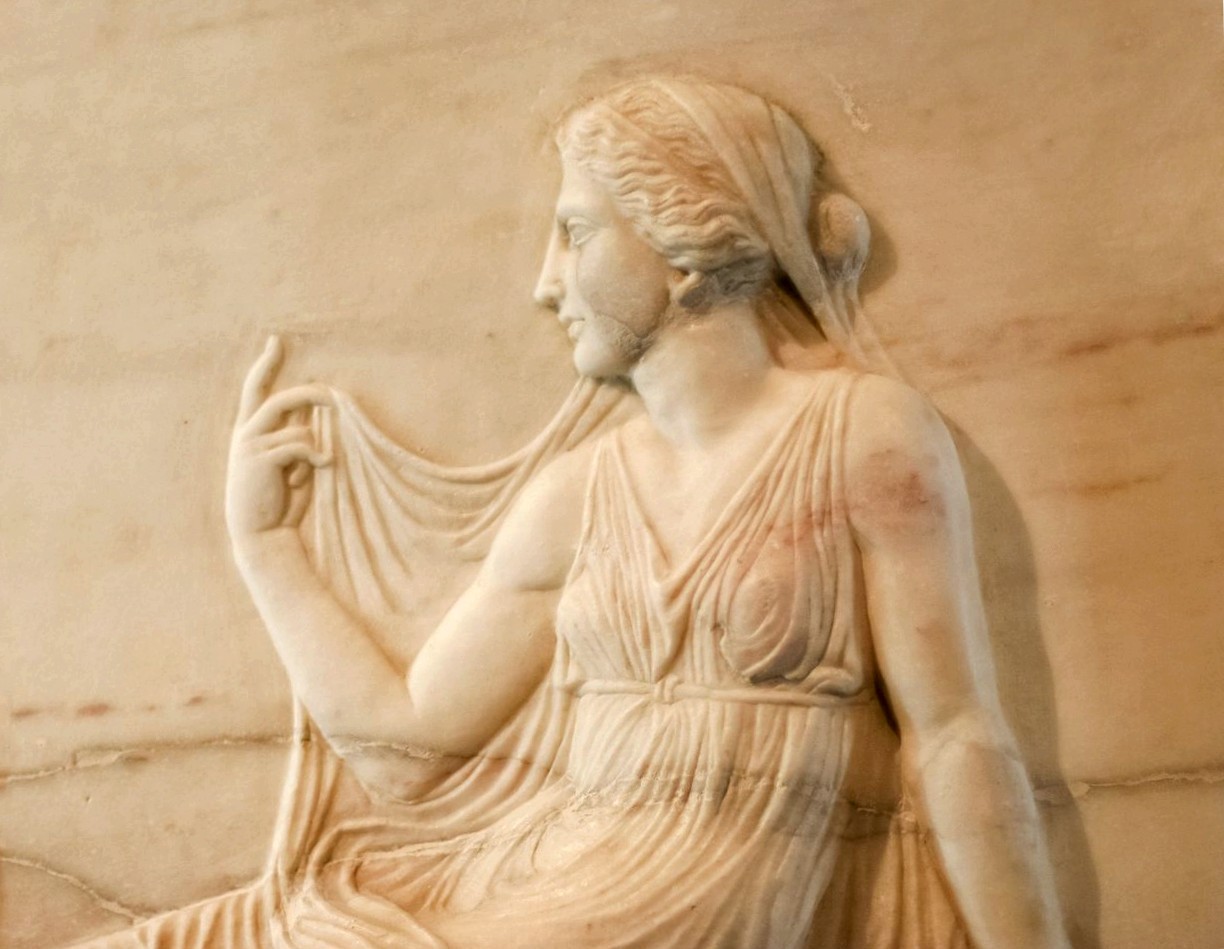 This marble relief shows a beautiful female oracle who, according to Roman belief, transmitted divine prophecies. Find out what role women played, what priestesses were afraid of, and many more facts about the Roman Empire in the latest National Geographic Special issue Rome.

A Roman woman spent her life in manum viri (Under male control) – first their father’s control, then their husband’s. Girls received little education beyond what they learned at home. After marriage, the woman ran the household, supervising the mostly enslaved servants, and kept the keys to the house. Wives could inherit their husbands and were allowed to manage their own money or property at age 25.

Pudicitia (modesty)was the highest virtue of a Roman woman. Women were to live modestly and give children to the empire. If her husband died before she had three children, the widow had to remarry. Extramarital sexual relations, even by unmarried people or widows, were allowed by the paterfamilias to be punished arbitrarily, often by an honor killing.

Few women worked outside the home, mostly as prostitutes, hairdressers, or, rarely, as businesswomen or midwives. Women did not have the right to vote or stand for election, but documents discovered in Pompeii show they actively supported candidates. Their right to property was hotly contested, as Roman men considered women frivolous and easily seduced. Some more liberal philosophers of the time advocated education and public office for women, but their ideas didn’t catch on.

A typical Roman woman’s day was based on her husband’s: during the morning negotium, when the husband went about his business, she did the housework, then dressed and coiffed herself to spend the afternoon leisure hours with her husband. Together they went to chariot races, the theater or the thermal baths. Women usually wore a stola, a traditional dress, and a brassiere made of a leather strap, to which strophium. Jewelry consisted of bracelets, earrings, and anklets. women of dubious reputation wore togas of transparent fabric.

Protest of the noblewomen

While the men between 264 and 146 b. Chr. fought against Carthage in the Punic Wars, women in Rome played larger roles in everyday business and public life. Concerned senators passed the Lex Oppia, a law that limited how much gold women could own and what they could wear, under the pretext of reducing expenses in wartime. When restrictions were not lifted after the war ended, Rome’s matrons marched on the Forum and won a temporary override.

"What [women] really want is boundless freedom or, in truth, licentiousness. And if they win now, what won’t they try to do?"

27 v. Chr., When Octavian and Antony were vying for the imperial throne, Octavian’s wife Livia Drusilla publicly campaigned for her husband. She embodied traditional values, but extended women’s public influence through protection and private influence in her role as "Augusta". centuries later, Emperor Theodosius’ daughter Placidia had to marry Flavius Constantius. During the 30-year reign of her son Valentinian III. she became the powerful regent.

For even more interesting facts and graphics about ancient Rome, check out the National Geographic Special Rome.

Walking through Rome today, one encounters the past everywhere: there are the ruins of the Roman Forum, where men once did business in togas; the precisely constructed aqueducts; the Colosseum, home of gladiators; the statues of ancient deities and saints in front of the Pantheon, which remind us that the Roman emperor Constantine legalized the Christian faith in 313. This booklet is divided into four chapters: Rome’s origins, its rise to power on the Mediterranean, the heyday of the Roman Empire, and finally the events that led to the division of the empire into eastern and western parts, its decline, and finally its dissolution. On 100 pages we show: To conquer an empire is a great achievement; to lead it, quite another. The Roman Empire was a master of both. Don’t miss out and buy a copy now!